Even the consideration of drug price controls reduces prices

I’m sure few TIE readers have failed to notice that there’s a ton of discussion of drug prices and price control policies these days. Could the mere consideration of such policies cause price reductions, perhaps by manufacturers trying to avoid the bad PR that could turn discussion into legislative action?

Work by Ellison and Wolfram suggests the answer is “yes.” They examined drug prices during the run up to and through the early 1990s efforts at national health reform. One of the policy ideas in 1993 was to push drug prices downward via purchasers with massive market clout. In particular, Medicare was to add prescription drug coverage to its benefit package and use its massive size to negotiate discounts. (Sound familiar?)

The data suggest that this spooked the drug industry. While the health reform package was being formulated, pharma stocks fell 40%, Ellison and Wolfram wrote. Here’s their look at what happened to prices, by various measures (defined under the chart): 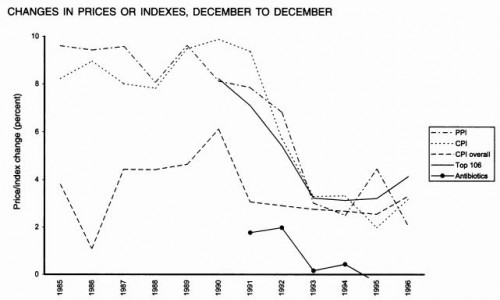 In the chart, “PPI” and “CPI” are the producer and consumer price index for pharmaceutical products; “CPI overall” is the CPI for all products; “Top 106” is a set of the 106 largest revenue drugs in the 1990s; “antibiotics” are “virtually all” antibiotics sold from 1990-1996.

From 1991 through 1996, overall CPI growth was steady, but by all drug measures, drug price growth fell, and dramatically so just as health reform was being formulated. In particular, broad measures of drug price growth were nearly pegged to overall inflation growth from 1993-1996.

Growth in drug R&D took a hit too, as shown in the following chart. As a percent of sales, it flattened in the early 1990s. Annual change went negative in 1994. 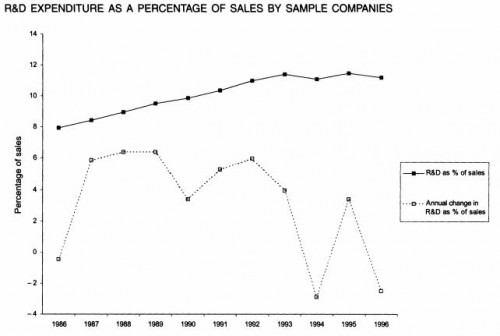 The results presented here suggest that there was a political component to pharmaceutical pricing during the health care reform debates. In particular, the firms we identified as more politically sensitive were more likely to engage in coordinating pricing, consistent with a pledge many firms made not to raise prices more than the rate of inflation.

A caveat is that most of the action was restricted to wholesale prices, though some filtered through to transaction prices. A lesson is that merely the threat of policy change can affect prices and R&D investment. Talk is still cheap, but perhaps not as cheap as we may think.