I’ve gotten a lot of comments and emails about my post on wait times last week. I wish I could respond to all of them, but there are only so many hours in the day. I think Avik Roy’s comment sums up what many of you are thinking, though, so I’ll use his as a springboard for further discussion:

Not sure if you’ve represented wait times, doctor supply, etc. in the fairest way in these slides. Too lengthy of a discussion for a comment, but it’s certainly premature to say “enough with the wait times already.” Fair to say that there are ways to save money without worsening wait times—but unfair to say that opponents of Obamacare don’t have ideas to do just that.

Two simple criticisms: you haven’t represented wait times for common surgical procedures in these slides, and your doctor supply slide doesn’t include specialists.

Let’s take this bit by bit.

First of all, I beg of you to go back and reread my post. Nowhere in it did I claim that (1) the PPACA would make this better at all, nor did I say (2) that opponents of it don’t have any ideas on how to fix the system. In fact, I explicitly said, “I have no problem with disagreement on how to fix the system“. The PPACA has nothing to do with that post, the data are all from before it was passed, and I do not doubt that there are ideas outside of that law on how to improve wait times. I thought the system was broken before it passed, I don’t think it will fix it entirely, and I welcome further debate. This isn’t a partisan argument. I’m not discussing any bill, any law, any proposal, or any politician. These are data describing the health care system. When I say “enough already”, it’s because I’m frustrated that so many people are entrenched in defending a system that costs too much, is accessible by too few, and provides less than adequate quality. I am not in any way defending the PPACA, or attacking those who oppose it. I really wish so many of you would stop reacting as if I were every time I post.

Now on the the meat of the matter. Avik is first concerned that I didn’t represent wait times for common surgical procedures. I did give you the link to that data (and even described it), but I went ahead and made some charts anyway.  Here is the percentage of people who have to wait 2 or more months to see a specialist: 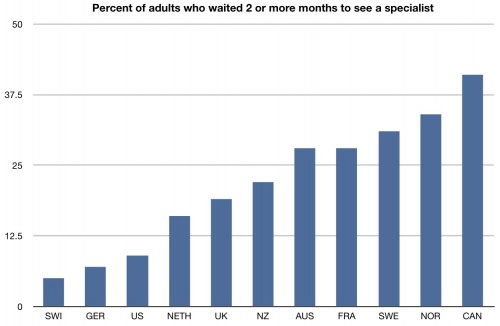 We do better here (as I said), although we’re still not #1. Here’s the percentage of people who have to wait at least four months for elective surgery: 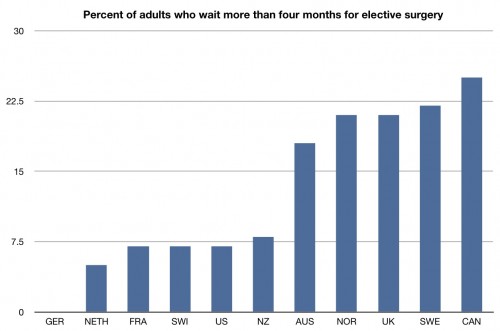 Again, we are not the worst, but we’re not the best either. But I’d still argue that this last piece is the least significant. Elective surgery is, well, elective. It’s not emergent, and it’s sort of optional. So I don’t have a problem making people wait a bit for that. Moreover, some percentage of us will need surgery. A larger percentage of us will need to see a specialist. But nearly all of us will need to see the doctor at some point when we’re sick, so I maintain that the metric I presented last week is the most important. And on that metric, we don’t do very well.

If you have good data on other metrics, I welcome them. But this changes nothing of what I said before.

Let’s get to Avik’s last criticism. He says I didn’t include specialists. Here they are*: 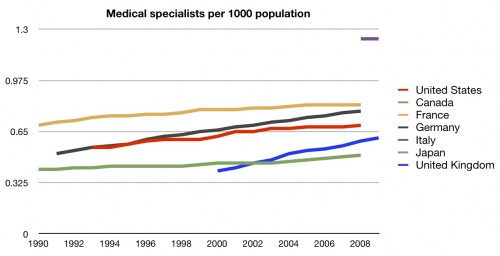 Solidly middle of the road. For the sake of completeness, here are surgical specialists (which in OECDese means all surgeons): 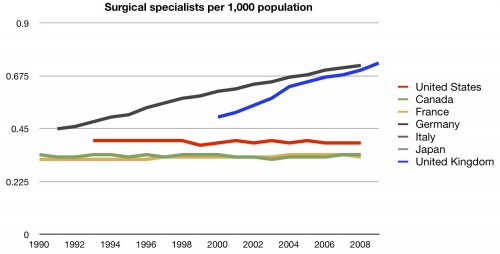 Nothing to brag about. Finally, let’s look at all physicians:

Yes, I showed you GP’s before. That’s because I think when discussing the health care system, we should focus on the most commonly used and needed type of resource. But the truth is that it doesn’t matter. We don’t have a lot of doctors in the US, period. That’s after spending a fortune.

My original theme stands. When you stop cherry picking, wait times are not the issue in every country that we often make them out to be. In fact, the US doesn’t look nearly as good as you’d imagine given our spending. We also don’t have a lot of doctors, either, which makes sense given the perceptions of visits I shared last week.

*I always list all G8 countries minus the Russian Federation. If you see no data for one country or another in a certain chart, it’s because there was none in the OECD data.

UPDATE: Fixed a denominator problem in the surgeon chart title.

UPDATE #2: Thanks to commenter Julian. There were some mistakes in the original chart on specialists. Fixed.