Empathy and the Internet

This week I posted a column that was reposted in Washington Monthly about the importance of social insurance programs that Congressman Ron Paul opposes and often regards as unconstitutional. Among other things, I noted that:

Medicare’s first, often-forgotten achievement was to integrate hospitals throughout the south. A remarkable paper by Almond and colleagues documents that Medicare markedly reduced post-neonatal mortality rates among African-American infants in places such as the Mississippi delta. Medicare pried open the doors of hitherto segregated facilities, saving the lives of striking numbers of black infants who would otherwise have died from pneumonia, dehydration, and other readily-treated ailments. That was the human reality of segregation that federal civil rights laws, and the major Great Society programs, sought to address….

I also included a picture of my wife Veronica giving her brother Vincent his daily shave. 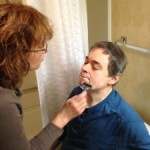 Because of Social Security’s disabled adult child program, Medicare, Medicaid, and a host imperfect, sometimes costly, often essential programs, Vincent has been able to spend his adult life in relative dignity, safety, and comfort. Without these programs, Vincent might well have spent his days as so many other people with intellectual disabilities did into the 1970s: whiling away his time within the back wards of some state mental facility.

Here, for example, is commenter “Edward.”  He writes:

Are those violins I hear playing in the background? Cry me a river, sunshine. So, I suppose the US was an inhumane society prior to 1964? Go ahead… try selling that to the voters, while they are being reminded of our GDP to debt ratio in 1963.

I’m not certain how to take these comments. Perhaps they are intended as some sort of Swiftian satire. I don’t think so. Another commenter told me to “stop being such an uptight little lesbian,” because I thought that Christopher Hitchens should have been more gracious in his polemical advocacy of an atheist perspective.

Such comments illustrate how the combination of political polarization, relatively unfiltered anonymity, and spontaneity make the internet a wonderful place, but also sometimes such a toxic one. The internet, and the cable TV scream-culture in so many ways encourage us to self-segregate, and to overlook the humanity of people on the other side of various ideological divides. Chris Hayes and his guests, here in his morning MSNBC weekend show, do a nice job of discussing this issue.

I really like this clip, in part for its evocation of a great cartoon in which a man beckoned to bed by his wife responds: “I can’t…. Someone is wrong on the internet.” I also like this clip because of (for want of a better term) the gentlemanly way that Hayes himself conducts conversation on this program. He emphatically communicates his own perspective. He does so in a civil and reflective way which recognizes that there are human beings on both sides of most serious political debates, and that we might actually learn something if we listened to what other people have to say. I wish other cable TV anchors would emulate this approach.

I’m starting a book on America’s approach to intellectual disability in public policy. It’s a complex and sometimes a sad subject. There is one bright spot, though. This byway of American social policy is unusually free of the usual partisan invective and culture war rhetoric that disfigure so much of American social policy. Millions of Democrats and Republicans, liberals and conservatives, pro-life and pro-choice Americans have been personally touched by these issues. People who hold each of these perspectives have helped bring about massive social, cultural, and legal progress over the past several decades in matters of intellectual, developmental, and behavioral disabilities.

People touched by these issues may have very different political and moral beliefs. Yet common experiences, needs, and fears make it harder for liberals and conservatives to regard each other as depersonalized figures on internet or TV news. It makes it a little harder to scream at each other from a distance or to contribute awful entries in a comment thread. That’s a good thing.