Does 340B hurt patients? Is it Obama’s fault?

Writing in the WSJ, Scott Gottlieb makes it sound like the Affordable Care Act has spawned a monster in the 340B drug pricing program (“How ObamaCare Hurts Patients”).  Gottlieb claims that “ObamaCare is taking a rotten feature of the old system and making it worse.” The core of his complaint is the expansion of the program from about 90 hospitals initially to thousands of covered sites today, blaming the Affordable Care Act. But most of the expansion in the program occurred well before Obama took office or the ACA was signed. From the GAO: 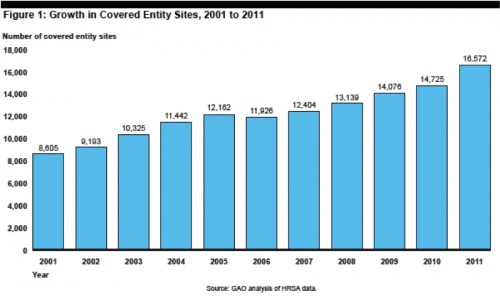 Where did this “rotten feature” come from?

The 340B program was enacted as part of the larger Veterans Heath Care Act of 1992 with bipartisan support. Indeed, Public Law 102-545 passed by a voice vote in both the House and the Senate. Co-sponsors included Newt Gingrich. It was signed by President Bush in November 1992. When the Republican majorities created Medicare Part D a decade later, 340B wasn’t scrapped. This was Republican drug policy.

Here is a description of the 340B program from a recent 8-0 opinion from the Supreme Court, Astra USA, Inc. v. Santa Clara County:

The Medicaid discount program was the price the industry paid to gain coverage for their drugs in Medicaid. One reason changes weren’t made in Part D was that the industry gained greater access to the Medicare market in 2006. These deals have (at least) two sides; Gottlieb conveniently fails to mention the quid pro quo.

In 2011, the GAO described the program in a 54 page report. The main points (from the Executive Summary):

1. “[A]ll covered entities reported using the program in ways consistent with its purpose.” But HHS/HRSA should audit much more effectively.

2.  340b does not generally cause shortages:

According to the 61 340B program stakeholders we interviewed, manufacturers’ distribution of drugs at 340B prices generally did not affect providers’ access to drugs. Specifically, 36 stakeholders, including those representing manufacturers, covered entities, and non-340B providers, did not report any effect on covered entities’ or non-340B providers’ access.

3.  Shortages are limited to one particular drug (IVIG) and others only after significant price drops:

The remaining 25, also representing a wide range of perspectives on the 340B program, reported that it affected access primarily in two situations: (1) for intravenous immune globulin (IVIG), a lifesaving drug in inherently limited supply; and (2) when there was a significant drop in the 340B price for a drug resulting in increased 340B demand. In both situations, manufacturers may restrict distribution of drugs at 340B prices because of actual or anticipated shortages. Stakeholders reported that restricted distribution of IVIG resulted in 340B hospitals having to purchase some IVIG at higher, non-340B prices. They also reported that restricted distribution when the 340B price of a drug dropped significantly helped maintain equitable access for all providers.

My take: Gottlieb seems to be recycling a 2011 GAO Report and making it seem like it is mainly Obama’s fault. Gottlieb makes more interesting comments on oncology reimbursement, which I plan to discuss in a future post. HHS just published the 340B orphan drug rules in the Federal Register on July 23, 2013 and I need to read them carefully first.