With so much press being made about doctors refusing patients with Medicare and Medicaid, it seems like public insurance is just a bad deal. Some of us, however, have been arguing that you’re only hearing part of the story. For instance, both Harold and Austin have argued that only looking at one large and broad private plan ignores the fact that many other private plans are much less robust and offer more limited access than BCBS. Others, like me, have argued that by focusing on specialists and adult docs, we miss the populations most often covered by these prorgams.

A new study just published in Archives of Internal Medicine gets at some of these problems:

We performed an analysis of trends from 2005 through 2008 using data from the National Ambulatory Medical Care Survey (NAMCS). NAMCS is a nationally representative survey administered by the Centers for Disease Control’s National Center for Health Statistics. It contains information about physicians practicing in nonfederally funded, nonhospital–based offices throughout the United States, excluding those in anesthesiology, radiology, and pathology. Data on hospital associated practices were not available. NAMCS uses a complex sampling design with physician weighting so that national estimates of physician and practice characteristics can be reliably generated… The sample was restricted to physicians who accepted new patients (4632 physicians, 95.1% of the sample). Pediatricians and obstetricians (520 physicians) were excluded in the analysis of Medicare acceptance rates. We report weighted percentages of physicians who accepted new patients by insurance type and year…

What did the researchers do? They examined data from a representative sample pf physicians. Specifically, they looked at how often physicians accepted new patients by insurance type and year.

What did they find? The overall acceptance rate of new patients was pretty static from 2005-2008, going from 94.2% to 95.3%. The percentage of physicians accepting new Medicare patients dropped from 95.5% from 92.9% (about 2.5%). But here’s the thing. There was a bigger drop in physician acceptance of patients with private noncapitated insurance from 93.3% to 87.8% (about 5.5%). In fact, they found that over 90% of physicians accepted new Medicare patients. Reports of reimbursement rates driving away physicians may be more anecdotal than widespread.

Using data in tables attached to the study, I also made some charts showing how new patient acceptance rates of physicians differed in the groups I’ve argued matter. Let’s start with primary care physicians: 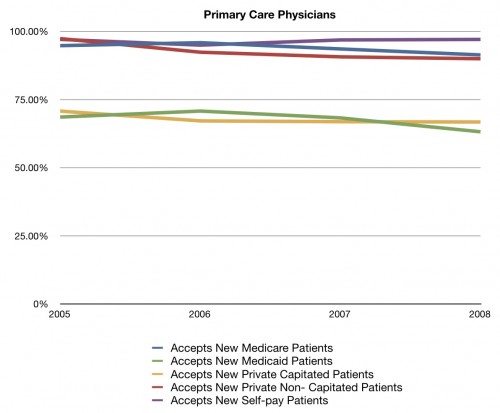 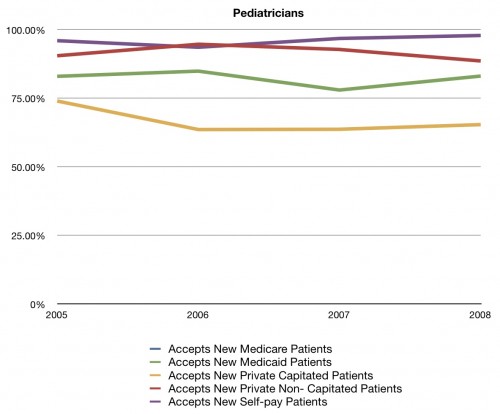 Now obviously there’s no Medicare line, as these are kids. But notice the Medicaid line? Not much change overall from 2005-2008. Here’s the shocker, though. The acceptance of Medicaid is much closer to that of private non-capitated patients, and much better than that of private capitated plans. Acceptance rates of patients with those plans dropped off pretty severely between 2005 and 2008. 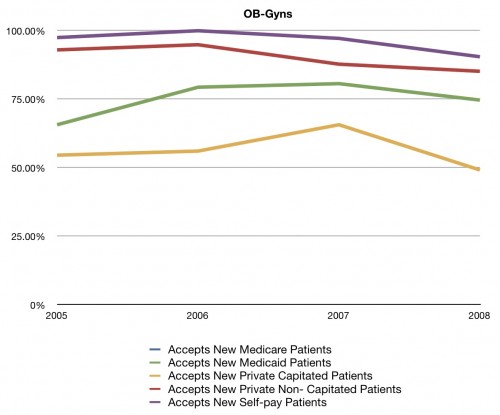 I’m not arguing that Medicaid and Medicare don’t under-reimburse, or that they don’t have significant issues. They do, and they do.

That’s a much different story. It’s one worth investigating further.