Do substance use disorders cause homelessness?

It seems to be a stylized fact that substance use disorders (SUDs) contribute to homelessness. Though an association is clear, few studies I’ve seen are well-equipped to make a causal inference. For it is no doubt also likely that homelessness contributes to SUDs. Below are quotes from studies I’ve found that consider the causes of homelessness. I thank you in advance for sharing more.

National Coalition for the Homeless. Why Are People Homeless? July 2009.

Rosenheck R,FontanaA. A model of homelessness among male veterans of the Vietnam War generation. Am J Psychiatry. 1994 Mar;151(3):421-7.

For fun, here’s what that structural equation modeling looks like graphically: 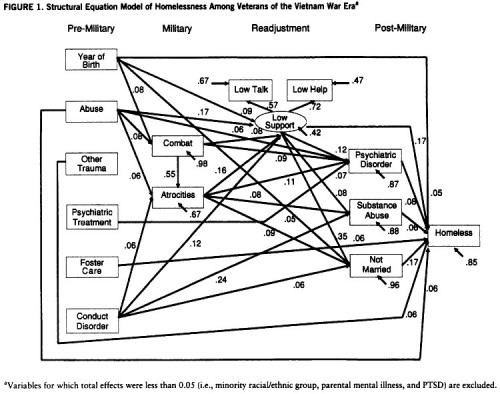