The Institute of Medicine’s (IOM’s) Knowing What Works in Health Care is chock full of depressing news about the state of medical science. I’ve already posted passages from it twice (one, two). Page 93 commences its “Dearth of Evidence” section.

Commonly, researchers carefully review hundreds of references from the literature, only to conclude that no eligible study that directly addresses the question of interest exists. […]

Neumann and colleagues (2005) reviewed the availability and quality of evidence for 69 medical devices, surgical procedures, and other medical therapies that were subject to national Medicare coverage determinations from 1998 to 2003. The researchers found good evidence on health outcomes for only 11 of the 69 technologies (16 percent). […] For more than 29 technologies, there was either no evidence at all (6 technologies) or poor-quality evidence (23 technologies) because of a limited number of studies, the weak power of the studies, flaws in the design or the conduct of the studies, or missing information on important health outcomes. The evidence was considered “fair” for 29 technologies (42 percent). […]

For almost 40 percent (44 of 114) of [thier] recommendations, the USPSTF concluded that the evidence was insufficient to determine if the service had an effect on health outcomes for the specified population because of a limited number of studies or the weak power of the studies, important flaws in the design or conduct of the studies, gaps in the chain of evidence, or a lack of information on important health outcomes. [Emphasis added.]

The IOM’s Learning Healtcare System Concepts Annual Report emphasizes the point with the chart below (h/t Ashish Jha), the caption for which reads,

Less than 20% of AHA/ACC [American Heart Association/American College of Cardiology] heart disease management recommendations are based on a high level of evidence and over 40% are based on the lowest level of evidence: Level A evidence (multiple populations and risk strata) to Level C (very limited population risk strata). The proportion of recommendations with high evidence levels has not increased over time. 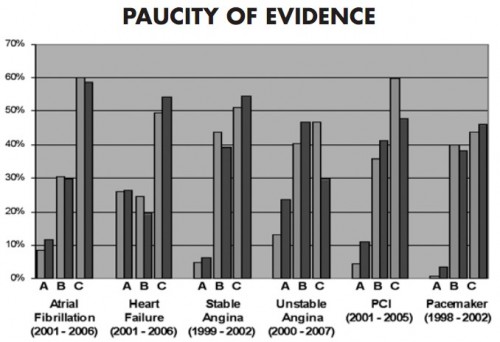 Evidence-based medicine has a long way to go.