I’m giving him full credit right up there in the title. Twice in the last two weeks I was all riled up and feeling the need to blast out posts on how everyone needed to stop freaking out and pay attention to real risks and not the scream du jour. But  before I could even get to it, there was Christopher Ingraham in the Washington Post, doing it for me.

First up was the horrific train accident on the East Coast. Let’s acknowledge that it’s a horrible tragedy, ok? It’s also totally reasonable that it captured our attention. I can’t even fault people for being concerned that our rail infrastructure might need some updating, although I don’t think it’s clear yet that this was the cause of the crash.

But then I started hearing from people complaining that rail travel was unsafe, period. Or at least unsafe compared to other forms of travel. You hear the same sort of thing whenever there’s a plane crash, even though that’s like the safest way to travel. And you all know that I hate when people ignore that car travel is pretty much the unsafest way to go, especially since accidents are the number one killer of children.

So I planned to make a chart on how all of these things compared to each other, but there was Christopher Ingraham, on the case already: 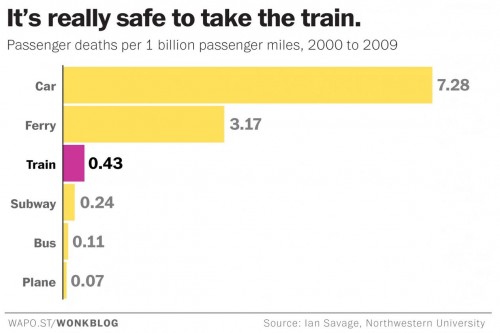 Yes, trains are less safe than planes, buses, or subways, but still WAY safer than driving. So deciding to cancel that 150 mile train trip and drive instead would not be rational. Thanks, Chris!

And then, this week, he took on laundry pods. those are those little prepackaged detergent things for the dishwasher or laundry. There were news stories in the fall about how kids were going to the ER in droves because they were eating them. The usual panic buttons got pushed. But, again, I wanted more information. How many is “droves”? How does this compare to other panics?

I was reminded of a bit I wrote about Plan B not too long ago, when people “worried” that would be taken inappropriately and people would overdose:

All drugs, when improperly used, carry significant effects. In 2009, there were over 70,000 calls to poison control centers for concerns about acetaminophen and more than 88,000 for ibuprofen. More than 30,000 calls were made for diphenhydramine, and 4 of those cases resulted in deaths. Just looking at kids 5 years of age and under, there were more than 130,000 calls for analgesics, 53,000 for vitamins, 48,000 for antihistamines, and 45,000 for cough and cold preparations. And yet, no one seems to be too concerned that these medications could be purchased “alongside bubble gum and batteries”. And, for the record, battery ingestions killed 4 kids in that age group that year.

It’s all about context. So I planned to write a post on how calls to poison control for laundry pods compared to other things. But there was Christopher Ingraham, on the case already: 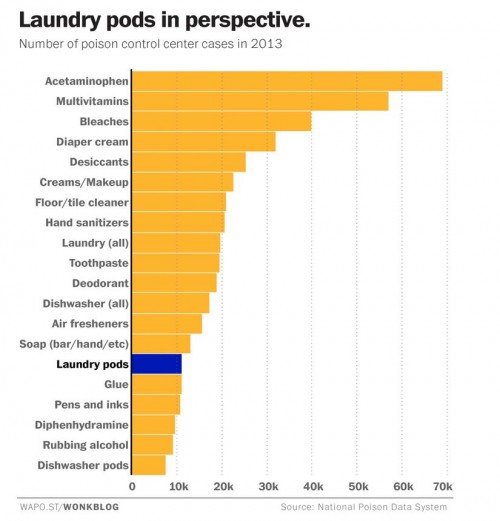 We need to keep these things in perspective. Chris is helping.