Childhood bullying: Not a big deal?

Children have been bullied since — well, since we’ve had childhood. There are now widespread movements to prevent school bullying. It’s clear that bullying was tragic for girls like Rehtaeh Parsons, who committed suicide after first being raped and then cyberbullied by the perpetrators, who sent pictures of the assault to her classmates. But this is an extreme event. Is the focus on bullying yet another overreach of the nanny state? Or is childhood bullying a significant mental health threat?

There is a timely study on the adult consequences of childhood bullying in the current JAMA: Psychiatry by William Copeland, Dieter Wolke, Adrian Angold, and Jane Costello. Reviewing the literature, the authors found that being a victim of bullying is associated with childhood “physical health problems,… depression, psychotic symptoms,… poor school achievement[, and]… an increased risk of suicide ideation and suicide attempts.”

However, as the authors note with ill-concealed bitterness, “bullying is still commonly viewed as just a harmless rite of passage or an inevitable part of growing up.”

Angold and Costello are the leaders of a study that has been following a cohort of children in a region of Western North Carolina from childhood into young adulthood. Copeland and his colleagues use these data to look at whether being a victim of bullying as a child, or being a bully, is associated with adult mental health problems. Are the psychiatric consequences of bullying transient problems of childhood, or do they persist into adulthood?

Angold and Costello’s data are ideal for this question because they recruited a random sample of all children in  the region. Many studies gather data from children who are seen in clinics or children attending school. Children found in these settings will differ systematically from the population as a whole; so Copeland and his colleagues are better able to describe the effects of bullying on all children.

The first notable finding is that bullying is widespread: an estimated one in four (26.1%) of children in Western North Carolina reported being bullied at least once, with boys and girls reporting similar rates of bullying. Overall, victims of bullying in childhood had more anxiety disorders in adulthood. The association was surprisingly strong, as shown in the following Figure. 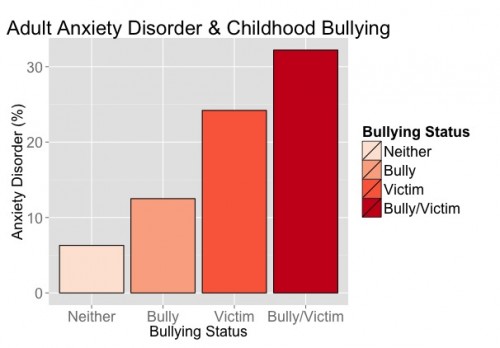 The first column represents the rate of anxiety disorders in  the adults who were neither bullies nor victims in childhood. The second and third are those who were just bullies or just victims, and the last is the rate of disorder among adults who were both bullies and victims of bullying. Although anxiety is a universal experience, an anxiety disorder is a severe and potentially disabling condition. The rate of such disorders is almost four time as high among victims as among those with no experience of bullying, and nearly five times as high among those who were both bullies and victims. In addition, Copeland et al. found that

those who were both victims and perpetrators were at increased risk of adult depression and panic disorder. Female bullies/victims were at risk for agoraphobia, and male bullies/victims were at increased risk for suicidality. These effects were maintained even after accounting for preexisting psychiatric problems or family hardships. This suggests that the effects of victimization by peers on long-term adverse psychiatric outcomes are not confounded by other childhood factors… bullies were only at risk for antisocial personality disorder in adulthood.

We can’t be wholly certain about causality here. Although it is very plausible that the trauma of being bullied would promote anxiety disorders, it is also plausible that bullies would target children with a predisposition to anxiety. If the latter is true, even a completely successful campaign against bullying would not eliminate the risk of adult anxiety disorders among these children.

What we do know, however, is that the mental health problems associated with bullying are not transient problems of childhood. I think that the authors are correct to conclude that

Bullying is not just a harmless rite of passage or an inevitable part of growing up. Victims of bullying are at increased risk for emotional disorders in adulthood. Bullies/victims are at highest risk and are most likely to think about or plan suicide. These problems are associated with great emotional and financial costs to society. Bullying can be easily assessed and monitored by health professionals and school personnel, and effective interventions that reduce victimization are available. Such interventions are likely to reduce human suffering and long-term health costs and provide a safer environment for children to grow up in.