Chart(s) of the day: Hospital quality for Medicaid vs. privately insured

According to a recent paper by Joel Weissman, Christine Vogeli, and Douglas Levy, process quality measures are lower for Medicaid enrollees who are hospitalized for myocardial infarction, congestive heart failure, or pneumonia than for privately insured patients. However, they’re not that much lower and in many states, they’re not lower at all. Though this is just one study, it suggests that we do have some work to do in terms of improving Medicaid quality (in some states), but that work is more modest than one might have thought. In light of these results, the extreme outrage over the poor quality of Medicaid seems a bit overstated.

CONTEXT: Understanding Medicaid performance relative to private payers and among other states may lead to better value.

MAIN OUTCOME MEASURES: Differences in the quality of care received by Medicaid compared with privately insured patients at the national and state levels.

CONCLUSIONS: Small national differences in quality between hospitalized Medicaid and private patients are promising, although merit close monitoring as states are forced to curb Medicaid reimbursements. Although quality for Medicaid patients varied by state, high correlations with private patients suggest that the factors driving quality have more to do with geographic factors in the delivery of hospital services than with state-established Medicaid policies.

Each data point in the charts below is the proportion of Mediaid or privately insured patients in the state receiving all Hospital Quality Alliance quality of care measures (PDF) for AMI, CHF, or pneumonia. 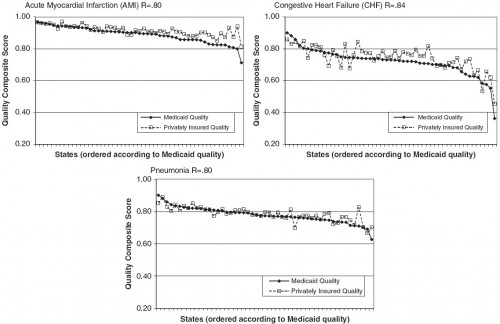 Interestingly, in Arkansas, Medicaid performs about as well as private plans by these measures (via personal communication with lead author). Consequently, these results are not a rationale for its Medicaid expansion by private option, though there are other rationales.