Can the “Better Care, Lower Cost Act” live up to its name?

Last month, Senators Wyden, Isakson, Welch, and Paulsen introduced an ambitious bill for Medicare reform. Dubbed the “Better Care, Lower Cost Act”, the bipartisan proposal aims to shift the program away from fee-for-service by amplifying the ACO model. With a more explicit enrollment mechanism (and a bigger stake in savings/losses) than ACOs, the bill would make providers more invested, literally, in patients’ health outcomes. The plan keys in on Medicare beneficiaries with multiple chronic conditions, with incentives for better care coordination, disease management, and prevention.

Prevention and coordination are worthwhile goals in their own right, but we shouldn’t blindly count on them to reduce spending or hospitalizations. In 2012, the CBO issued a report reviewing 34 different care coordination and disease management programs run through major CMS demonstrations. In order to generate net savings, the programs didn’t just need to reduce spending—they needed to reduce spending past a critical threshold to offset program fees. This required reductions on the order of 11-13%, a target that none of the programs were able to hit. The programs’ effects on hospital admissions were also limited.

These findings have limitations, but the table below outlines the programs’ average effects, stratified by different design features: 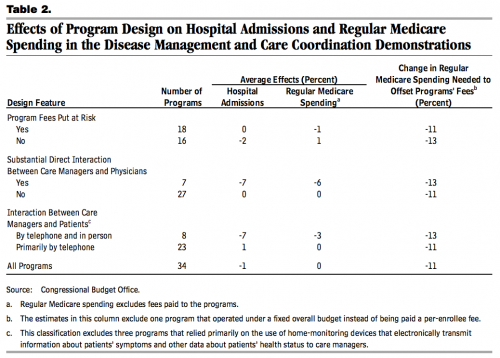 The text of the new bill seems to emphasize a role for telemedicine and remote patient monitoring, but the most successful programs identified by the CBO—which still didn’t achieve net savings for Medicare—employed significant in-person interaction between patients and physicians or care managers. Initiatives that relied primarily on telephone interaction had little to no effect on spending or hospital admissions, on average.

The telehealth landscape has evolved, so past may not be prologue. To the extent that old technology was insufficient, this should give us hope. To the extent that telemedicine doesn’t work because of behavioral biases that can’t be overcome by snappy apps (especially in an elderly population) we should reserve skepticism.

I won’t elaborate much on the prevention literature here, but decades of research have failed to demonstrate savings from preventing chronic disease. Health economist Louise Russell didn’t mince words in this 2009 Health Affairs perspective: “[H]undreds of studies have shown that prevention usually adds to medical costs instead of reducing them.” These interventions can be cost-effective and a worthwhile investment, but we shouldn’t think they’ll pay for themselves.

Having aired my doubts, I also want to commend the proposal for taking bold steps away from the fee-for-service model. Former CBO and OMB director Peter Orszag puts it this way: “The ACO concept blurs the line between providers and insurers; the Better Care approach destroys it.” Wyden et al have proposed capitating payment at the provider level. Current accountable care incentives suffer because providers still operate within the fee-for-service environment. Shifting the payment paradigm away from fee-for-service is an endgame that enjoys remarkable consensus, so pragmatic legislation moving in that direction should be given careful consideration.

I worry that we evangelize prevention and care coordination as tools to trim spending, despite evidence to the contrary. That said, I characterized the legislation as “ambitious” because it is, and maybe—just maybe—that ambition will make this time different.

Many thanks to Daniel Liebman (are you following him on Twitter yet?) whose literature review was helpful in writing this post.