Can medical scribes help increase access to care for veterans?

Paul Shafer is an assistant professor of health law, policy, and management at the Boston University School of Public Health and tweets at @shaferpr. Alex Woodruff is a Health Science Specialist at the Boston VA Healthcare System and tweets at @aewoodru. Both are members of the evaluation team for the MISSION Act scribes pilot described in this article.

The Veterans Health Administration (VHA) is the largest integrated health system in the United States serving over 9 million Veterans each year, though access to care is a persistent concern.

Electronic medical record systems were supposed to make health care more efficient and portable, but they have doctors spending a lot of time staring at screens—leading to burnout and less attention on patients. What happens when we give doctors more time to focus on their patients?

What are medical scribes and how can they help?

According to a 2016 study, providers in ambulatory care spend about half on administrative tasks (49.2%), including more than one-third of their time in the exam room with patients (37.0%). A newer study from 2020 estimated that physicians spend an average of over 16 minutes in the EHR per patient visit.

Medical scribes join doctors, nurses, and other providers in patient visits to help ease administrative burdens on providers by documenting visits and entering orders, allowing the provider to spend more time focusing on the patient instead of the electronic health record.

By shifting some of that administrative time away from the provider, scribes ideally allow them to be more present with patients and potentially see more of them without compromising quality of care.

Scribes have not been used widely in the VHA before but have been deployed (and studied) in community hospitals and clinics, both in the United States and worldwide. A 2018 VHA policy brief highlighted promising associations found in scribe evaluations thus far (Figure 1), including increased productivity, reduced documentation time, and greater provider satisfaction with no effect on patient satisfaction.

However, a robust systematic review of the effect of medical scribes used in emergency departments, cardiology, and orthopedics, completed last year by VHA found relatively poor strength of methods and evidence in evaluating potential effects of clinic efficiency, productivity, and patient and/or provider satisfaction. None of the studies that either report cites took place in the VHA, which means those results may not be generalizable to the VHA even if the strength of evidence concerns were not a significant problem. 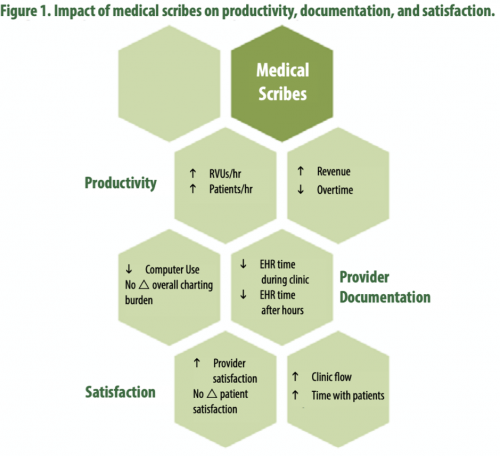 What is VHA doing?

Section 507 of the MISSION Act of 2018 required VHA to “carry out a 2-year pilot program under which the Secretary shall increase the use of medical scribes”. The evaluation team, comprising multiple Centers and Offices at VHA, designed a cluster randomized trial around the requirements of the law to generate causal evidence of the effect of medical scribes. The pilot includes the hiring of 48 medical scribes across 12 facilities. These facilities include four urban, four rural and two underserved facilities that were randomly selected among a pool of interested VA Medical Centers.

Thirty percent of the scribes are allocated to emergency departments and seventy percent to the high wait time specialties of cardiology and orthopedics. Each medical facility is supposed to hire four scribes, two as VHA employees and two as contractors, with an eye towards how to scale this up if the results are promising.

As the study continues, the impact of medical scribes will be observed across a number of outcomes — evaluated quantitatively to see how scribes affect productivity, wait times, etc., but also qualitatively to provide needed context to what the data do and do not tell us. The goal is to see if deploying scribes can improve productivity and reduce wait times without compromising patients’ satisfaction with their care. This would provide a proof of concept in the VHA before any decision is made about a larger investment.

The implementation of the MISSION 507 program has not been without turbulence. The official study launch, originally planned for March 2020, was delayed because of COVID-19, finally beginning in late June 2020. Scribes began to be hired well before the official pilot start date but despite the early start, hiring has fallen well short of its targets. Almost half of the scribe positions are vacant.

Hiring scribes as contractors has been much more successful than as employees to date, although their onboarding time is nearly 50% longer. These difficulties tell two important stories—1) with fewer scribes than expected, it may be more difficult to detect any real benefits (or harms) and 2) this raises concerns about the ability to scale the intervention, if the pilot proves to be successful.

Implementing a new wrinkle to health care delivery is never an easy task, even in a large integrated health care system. Expanding facilities and hiring more providers are easy solutions to point to, but harder to do. Scribes could be a lower cost way to expand access by preserving one of the most valuable resources that we have—face-to-face time between providers and their patients.

The MISSION 507 scribe pilot is approximately halfway done and to date, implementation challenges have been the most observable outcome. This trial holds a lot of promise for learning whether scribes really are a potential avenue for increasing access to care for veterans, time will tell if evidence supports that promise.