The following is co-authored by Aaron Carroll and Austin Frakt.

The WSJ has an article out today on how patients are foregoing prescription medications because of cost:

A review of insurance-claims data shows that so-called abandonment—when a patient refuses to purchase or pick up a prescription that was filled and packaged by a pharmacist—was up 55% in the second quarter of this year, compared with four years earlier.

The phenomenon coincides with rising co-payments for many drugs and increasing enrollment in high-deductible insurance plans that require patients to pay hundreds or thousands of dollars out of pocket before insurance kicks in.

Patients are deserting prescriptions for the most expensive drugs most often, according to the review by Wolters Kluwer Pharma Solutions, a health-care data company. For instance, nearly one in 10 new prescriptions for brand-name drugs were abandoned by people with commercial health plans in the quarter, up 88% from four years earlier, when the data were first tracked and before the recession began. Abandonment of generic drugs was higher, too, according to the data.

The trend is driven in part by higher out-of-pocket costs for covered medicines, pharmacists and Wolters Kluwer officials say. The average co-pays for brand-name drugs such as cholesterol fighter Lipitor rose to $28 a prescription this year, an 87% jump from 2000, according to the Kaiser Family Foundation. Some co-pays can be as high as $100. 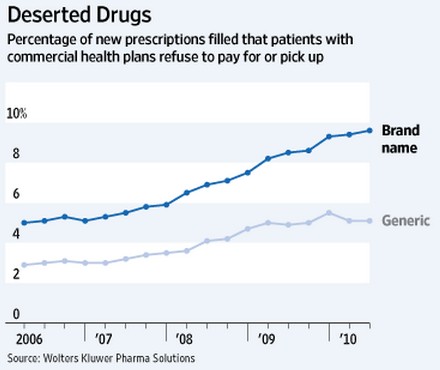 This is a serious issue and we’re happy the WSJ is highlighting it.  As with most things, the out-of-pocket cost of drugs affects the degree to which they are purchased and taken. Skimping on drugs for some conditions can have very serious health consequences. As the graph above illustrates, this “medication adherence” issue (as it is known in the health services literature) isn’t a new problem. Also, this is an area where the U.S. lags many of its peer nations.

In 2007, the Commonwealth Fund released the results of an International Health Policy Survey in Seven Countries.  They asked people this exact question.  This is what they found: 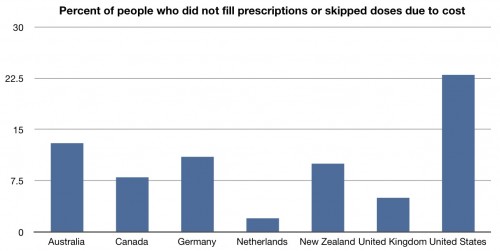 Significantly more people in the United States did not fill their prescriptions or skipped doses because of cost than in any of these other countries.  Plain and simple.

This has consequences.  Numerous studies have linked poor adherence to increased mortality and morbidity of disease, and increased health care costs in the U.S.  Adherence to antihypertensive therapy is particularly problematic as high blood pressure is predominantly asymptomatic and drug therapy may have numerous side effects.  Adherence has been found to be related to levels of cost-sharing, as well as other individual factors such as type of insurance, age, and health.

Put more simply, this is hurting and killing people.

It’s not just medications.  People are more likely to skip doctor visits for medical problems because of cost: 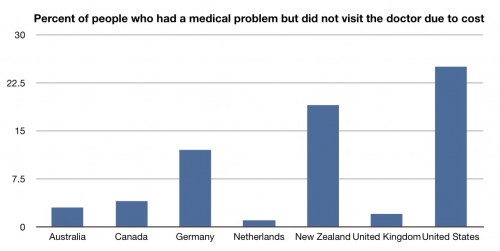 And they are more likely to skip other aspects of care because of cost. 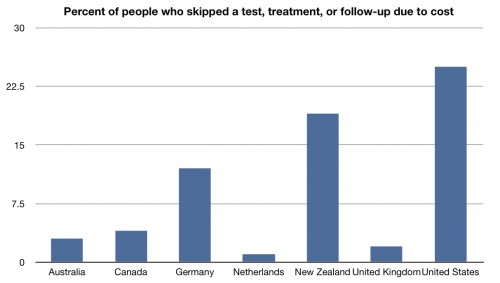 We like to think that we don’t ration in this country, that no one is told they can’t have care for one reason or another.  That’s not so.  As Ezra Klein said (months ago):

A 2001 survey by the policy journal Health Affairs found that 38 percent of Britons and 27 percent of Canadians reported waiting four months or more for elective surgery. Among Americans, that number was only 5 percent. This, Americans will tell you, is the true measure of our system’s performance. We have our problems. But at least we don’t sit in some European purgatory languishing without our treatments. That’s rationing.

There is, however, a flip side to that. The very same survey also looked at cost problems among residents of different countries: 24 percent of Americans reported that they did not get medical care because of cost. Twenty-six percent said they didn’t fill a prescription. And 22 percent said they didn’t get a test or treatment. In Britain and Canada, only about 6 percent of respondents reported that costs had limited their access to care.

Look, we have a health care cost problem in this country. Some of that is due to third-party payment. But shifting costs from third parties (insurers, the government) to individuals has effects other than just lower costs. It affects receipt of care. Some of that is necessary, health-preserving, life-saving care. Like it or not, it’s hard to solve the cost problem without jeopardizing health. That’s not to say it can’t be done. It’s just not a simple matter of increasing cost sharing.