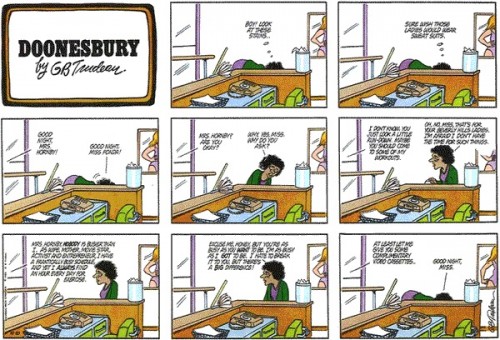 I was watching the Republican convention last night, and I was struck by how every single person speaking claimed to have come from nothing. Do no politicians ever come from the middle or upper class? Everyone struggled, everyone had hard times. The Romney’s ate a lot of tuna and pasta, and had a desk that was a door on two sawhorses. Paul Ryan waited tables, washed dishes, and mowed lawns. You’d never know that both came from prominent families with many connections.

Yes, my children have it much better than I did when I was their age. My dad made a shockingly little amount of money as a resident and a fellow. But… come on. I went to private school for twelve years before spending an embarrassingly large amount of money on college and medical school. I lived in moderate to large houses in nice suburban neighborhoods. I didn’t drive a Mercedes when I turned 16, but we did have a vehicle that was considered “mine”.

I was never hungry. I never worried that the power might go off. I had an unlimited supply of books. And I had a safety net in the form of family that was inviolable.

It’s tempting to try and make every tale into a hard luck one. We all want to believe we came from meager beginnings to where we are today. It’s the American Dream. It’s a story that sells.

There sometimes seems to be a lack of perspective out there. We all like to think we built what we have from nothing without recognizing that “nothing” isn’t even in many of our vocabularies. I think of this when I write about doctors complaining about “making ends meet“. I think about this when I read stories about how people in Manhattan complain about living on half a million dollars. I think about this when I read stories of people making $200,000 complaining about how hard it is.

And I think about it – and feel guilty – when I see myself saying similar things to my children.

I think we’d all do better, myself included, if we recognized how good we actually had it. We’d be more honest if we recognized that being worse off is relative, and that there are many for whom “struggling” has actual meaning. I think we’d do better by the next generation by teaching them that safety nets – in all forms – have value, even if they only provide you the safety and love to give you the space to better yourself.

I also think that we would do better by paying the debt of that safety net forward instead of imagining that it’s making people complacent. It didn’t do that for us.

Guess I wasn’t the only one who felt this way: