Are liberals more pro-woman? A cool graph from a natural experiment

People are still arguing about the GOP’s “war on women,” not to mention Hilary Rosen’s knock against Ann Romney, Mitt Romney’s claims that the Obama administration has failed to protect women’s jobs during the recession. Amidst the kerfuffle, a friend asked: Is there any empirically judicious way to determine which party is more pro-woman? 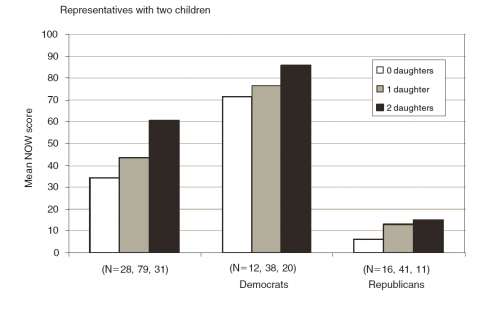 I’m not sure there really is. Women comprise the majority of the U.S. population. Women’s interests and perspectives range from Anita Bryant and Kay Bailey Hutcheson to Angela Davis and Katha Pollitt. A nice paper by Yale economist Ebonya Washington does offer insight.. (HAP)

I agree with Jonathan Cohn that women, particularly women with children, have strong reasons to support a generous welfare state.  From the days of the settlement houses, the Sheppard-Towner Act, and the New Deal right up to the present day, a conspicuous number of liberal reformers working hardest to improve conditions for needy families were women. Yet of course millions of conservative women have their own stories to tell. There is no unique women’s perspective on time-limited  welfare benefits, racial discrimination, capital gains taxes, or the Buffett Rule, much as I sometimes wish there was.

Still, it seems clear that most women obviously care more about certain issues than most men do. Men and women also rank things differently in the hierarchy of issues in which we all express greater or lesser concern. That’s true of everyday people. It’s also true of the men and women we elect to represent us in Congress, who allocate their attention and political capital across a broad range of important subjects. It stands to reason that women representatives would allocate more of these scarce resources on issues of (say) promoting access to contraception or deterring gender discrimination than their male counterparts would do.

In principle, we could test this. The ideal experiment would be to randomly switch legislator’s genders and then to administer careful surveys to examine how people’s political views varied between the two perspectives. Our University of Chicago IRB might balk at that.

We might be able to do something less airtight, but still pretty interesting: We could randomly assign legislators to have children of different genders and then see how these assignments are associated with changes in their votes. That’s exactly what Ebonya Washington did in an intriguing paper published in the American Economic Review four years ago.

Using congressional voting record scores compiled by the National Organization of Women (NOW) and other sources, Washington examined Congressional voting records covering the period 1997-2004. Representatives who happened to have a high proportion of daughters were markedly more likely to vote in favor of reproductive rights than were legislators with the same family size who happened to have a greater proportion of sons. The effects were large, statistically significant, and concentrated in this particular area of public policy.

Above is Figure 1 from Washington’s paper. It shows legislators’ mean scores in the 105th Congress on an index constructed by the National Organization of Women.

I believe the figure speaks for itself. Those with more daughters score markedly higher on NOW’s preferred voting measures. Similar patterns hold for other family sizes and when one controls for potential confounding effects such as family religious affiliation and President Clinton’s voting share in legislators’ home district. When Washington decomposed the measures into their component parts, by far the largest differences concerned bills that would ban or restrict teens’ access to abortions, legislation concerning contraception, and international family planning. 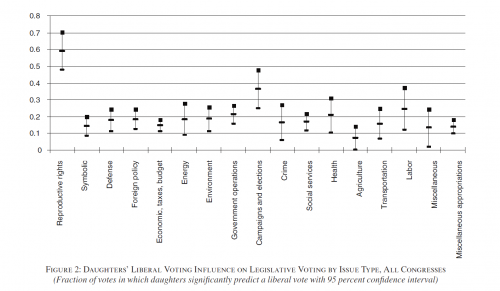 These results are interesting. It’s also interesting what doesn’t seem to come up. You might expect representatives with a high proportion of daughters to be more liberal on various social policy issues: social service provision, health, crime, labor policies. Indeed having daughters is associated with some increase in liberal voting patterns. The pattern is much weaker than one finds for abortion and contraception.

Washington gives some pretty interesting reasons why. There’s something about having a child who carries ovaries around with her that concentrates legislators’ minds. Maybe some fathers ponder the possibility that their precious daughters might someday be left alone to bear various life-changing consequences, or simple humiliation, as the result of an unintended pregnancy.  That’s enough for me.