Ezra posted yesterday on antimicrobial resistance (pointing to Eric Kroh and Megan McArdle). Good posts, but the data is much more complex. This is one of my primary research interests, so I’ll admit to some obsession on this topic.

First, antibiotics are an exhaustible resource, unlike most other pharmaceutical innovation. We need to manage resistance for long-term ecological balance. This simple fact must alter all policy responses to resistance. We can’t just make more, we also have to carefully extend the useful life of the antibiotics we have today (Health Affairs). Imagine it’s 1890 and we want to increase buffalo hide production. Additional financial incentives to hunt the last few buffalo won’t work. We need a long-term plan to balance new production and conservation. 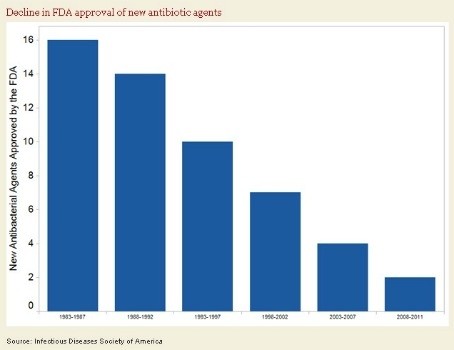 Looks grim? Some comments. The data series is limited to systemic antibiotics, excluding prior periods and other anti-infectives live antiretrovirals (saved millions of lives globally), antivirals (like oseltamivir), and vaccines (like Prevnar, the pneumococcal vaccine). It also treats all antibiotics as equally important, but more antibiotics are withdrawn from the market under a safety cloud than any other category of medicine. So let’s try the same FDA data sliced a different way: 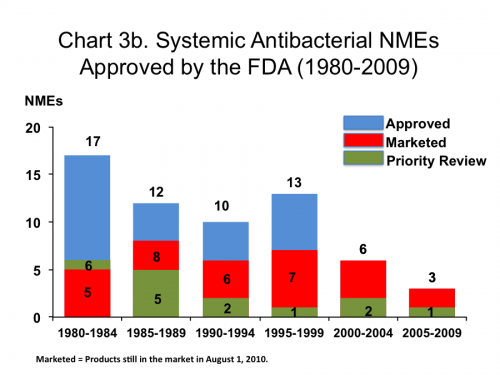 The blue segments are antibiotics withdrawn from the market, many with safety issues. The FDA may have been too lax in approving antibiotics in the 80s and 90s and has gotten tougher in the last decade. Perhaps that is appropriate. Most of these withdrawn antibiotics were “me-too” drugs in existing classes, which do nothing to fix long-term resistance. Now, let’s broaden the data to include all anti-infectives: 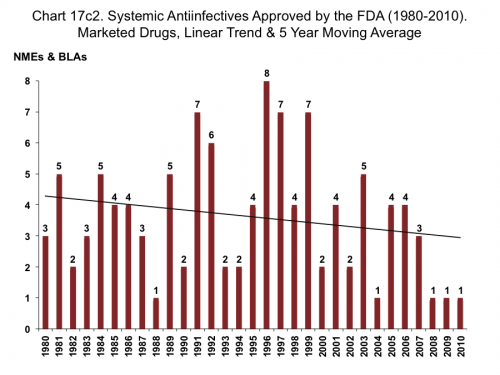 In the 1990s, we see a number of antiretroviral drugs introduced to combat AIDS. The linear trend is still downward sloping, but would be even closer to level when you back out the withdrawn antibiotics. But this still look like an innovation problem in anti-infectives, until one compares it to other classes. Consider cardiovascular drugs: 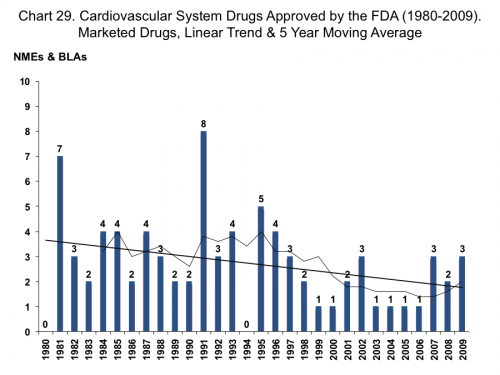 One reason we don’t read news stories about a looming crisis in CV drugs is the happy fact that resistance doesn’t destroy their usefulness. The billionth dose of atorvastatin (Lipitor) is just as effective as the first. Wish we could say that for penicillin or vancomycin. The take away point here is that declining innovation is not unique to anti-infectives. Let’s look at one more drug class, cancer drugs: 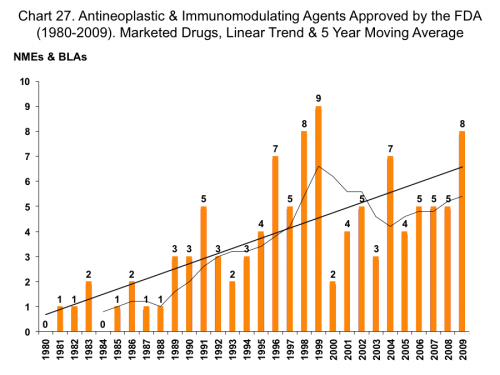 What a success story – if the goal is getting drugs approved by the FDA. The big draw in cancer is reimbursement – paying tens of thousands of dollars for short course chemotherapy per patient will clearly get the attention of drug companies. My main point here is to consider reimbursement for antibiotics as a primary tool for both incentivizing new drugs and also supporting long-term conservation.

So many more things to say, perhaps in future posts.

UPDATE: fixed a broken link.  The last 4 charts are from my unpublished working paper.

My research on the legal ecology of resistance: