Some readers have asked how things went at the National Health Policy Conference and, in particular, at the media plenary I participated in. At the plenary, Ezra Klein and Merrill Goozner were very generous in their praise of TIE (I like their work too!), and my jokes seemed to work. Plus, I managed to make most of my points. So, it was an enjoyable hour-and-a-half. People said it went well and was interesting. I believe them.

One thing Ezra said stuck in my head. Paraphrasing, he said that to the extent the public is not interested in policy, that’s not the public’s fault. That’s the media’s fault for not making it interesting. Ezra seems to have made it his mission to make policy more interesting and accessible.

This is very close to the same message I was delivering to researchers. If policymakers and the media do not seem interested in or aware of policy-relevant research, that’s not their fault. That’s the research community’s fault for doing a poor job of dissemination. Our mission at TIE is to do a better job of informing the health policy debate with relevant research.

Naturally, you might wonder what else Merrill, Ezra, or Trudy Lieberman said. To be honest, I was so busy making sure I didn’t make a fool of myself, I didn’t fully absorb much else, not clearly enough to risk trying to replicate any of it. You can catch a little in the intro to this interview of me on the RWJF NewPublicHealth blog. You can also dig through the conference tweets to find some about the plenary. They’re near the top since it was the last event of the conference.

I did attend some other enjoyable sessions at the conference, but I don’t have much I want to say about them. I do, however, want to share what I thought was the coolest slide I saw, presented by Karen Guice of the Department of Defense. Here’s the military’s flying ICU: 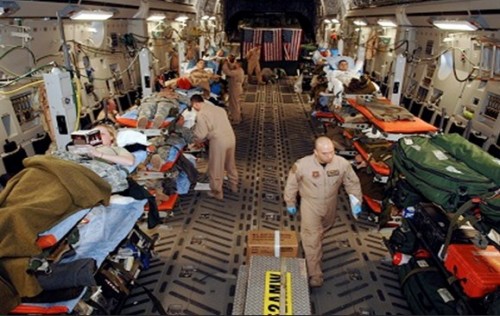 I don’t think we can ever do enough for America’s soldiers, but I am glad we can provide at least this for those who need it.