Adjusting for inflation is tricky

Abe Dunn, Scott Grosse, and Samuel Zuvekas are right: In many health care analyses, it is important to adjust for inflation, but there are numerous price indexes to choose from for the job. Which one should you use?

Helpfully, the authors surveyed various measures of health care price inflation and provided guidance on which to use in various circumstances. Their paper also explains why price indexes differ.

One important way they differ is the extent to which they incorporate changes in consumption patters. Laspeyres and Paasche type indexes hold fixed the quantities of goods and services consumed. The former fixes them in a base period and the latter fixes them in the current period. The only things that change in such indexes are prices. As such, they could misrepresent the actual impact of prices because people and institutions respond by changing how much of various goods and services they consume.

Put it this way, if the price of a service in the index went from $1 per unit in the base period to $1 billion per unit in the current period, consumption would fall to zero. People would substitute something else that’s cheaper. Lasperyes and Paasche indexes would miss that trend, though in different ways. The former would show massive inflationary effects because the good is in the basket in the base period, while the latter would show no inflationary effects because the good is not in the basket in the current period.

A Fisher index is the geometric mean of a Laspereys and a Paasche index. That makes it responsive to changes in consumption patterns, though not necessarily reflective of how they change period-by-period. A chained index, on the other hand, continuously updates consumption patterns.

Despite the differences in how they address consumption changes and scope, these three indexes of general price inflation track one another relatively closely, as shown in Figure 1. 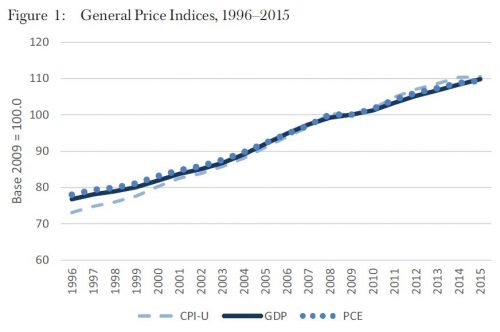 The chart below (the authors’ Figure 3) shows the historical trends for these three indexes, alongside the CPI-U. All start below the CPI-U and then fall into line with it by the late 2000s, with the exception of the MCPI, which rises above the CPI-U. That the MCPI has a different trend than the other medical price indexes is not surprising, since it is the only one of the three focused exclusively on out-of-pocket spending. 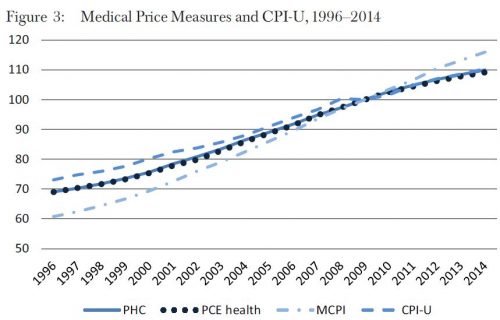 There are large differences in these indexes, as shown in Figure 2, reflecting differences in price growth in hospital care versus overall medical care and/or differences in growth from different payers or out-of-pocket spending. If you’re analyzing hospital payments, it’s very important to match the index to the type of analysis you’re doing and questions you’re addressing. 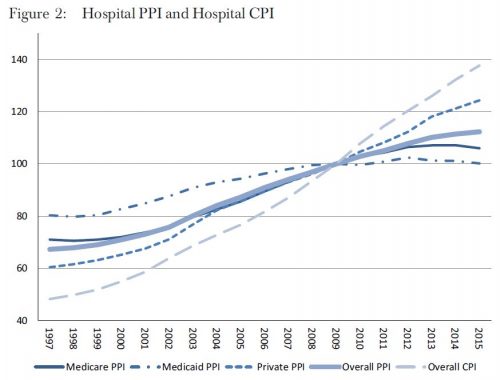 The authors discuss many other nuances and issues, which are beyond the scope this post. They conclude with this advice:

I’m certain many published analyses do not follow this guidance, including my own. In some cases, it may matter. In offering clear guidance on how to use health care price indexes, Dunn, Grosse, and Zuvekas have provided a valuable service.