Expanded coverage for substance use disorders is an important, largely-unnoticed features of the Affordable Care Act. ACA will (eventually) cover most of the uninsured. It will also expand the content of coverage through essential health benefit rules and related efforts.

How many people with current substance use disorders will actually benefit from these changes? There is no clear answer, but data from the National Survey of Drug Use and Health (NSDUH) provide a useful starting place.

NSDUH is imperfect. It does not provide detailed income or program participation data. Public use data also mask state identifiers. This infuriating self-sabotage is unnecessary to protect human subjects, and renders NSDUH less useful and more cumbersome than it should be in examining the impact of cross-state policy differences, for example in comparing opt-out and opt-in Medicaid states on ACA.

Despite these shortcomings, NSDUH is the largest nationally representative survey that includes detailed screening questions regarding drug and alcohol disorders, experiences in substance abuse treatment, reasons for not seeking treatment, and more.

Figure 1 shows the results for basic coverage. As measured by NSDUH, 38 million American adults were uninsured at the time of the 2011 survey. This figure itself understates the coverage challenge. NSDUH respondents corresponding to another 16,000,000 people report that they have health insurance, but that their insurance plan does not cover drug or alcohol treatment. Presumably respondents sometimes misunderstand complex insurance products. It’s not clear whether expert scrutiny of these same plans would yield higher or lower numbers. The order of magnitude is sensible. ACA’s provisions requiring plans to cover substance abuse treatment–at parity—are thus especially important. 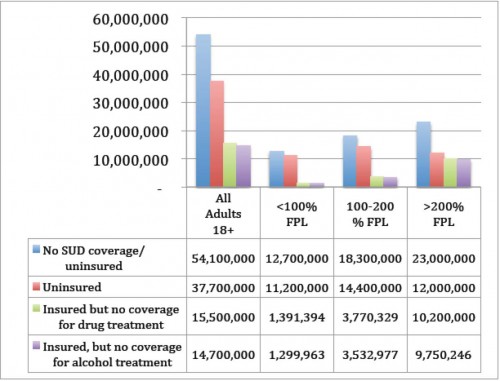 Figure 2 then focuses on individuals who satisfy screening criteria for drug and alcohol abuse or dependence. The leftmost bars show results for all U.S. adults over the age of 18. I then stratify in the rather gross income categories facilitated by these data, expressed as a proportion of the poverty line. 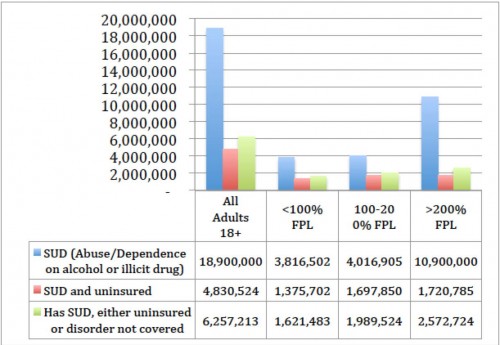 Almost nineteen million Americans satisfy screening criteria for a drug or alcohol disorder. About one-third are either uninsured or have health insurance that does not cover services for their particular substance use disorder. Of course, people with low incomes are far more likely than others to fit into this category.

About 4.8 million Americans face the dual challenge of both being uninsured and substance use disorders. About 1,4 million have incomes below the federal poverty line. These are the men and women most likely to be hurt if they live in states that opt-out of Medicaid expansion. Another 1.7 million have incomes between 100% and 200% of the federal poverty line. These individuals have the most to gain from creation of viable health insurance exchanges, and by ACA provisions that seek to bring mental health and substance abuse treatment more closely aligned with general medical care.

Figure 3 provides further information regarding these 4.8 million people. Eighty percent satisfy screening criteria for alcohol disorders, with about 35 percent satisfying criteria for some other substance use disorder. Marijuana is by-far the most common of these substances, but about ten percent of people report problems with psychotropic drugs, and another ten percent with analgesics. 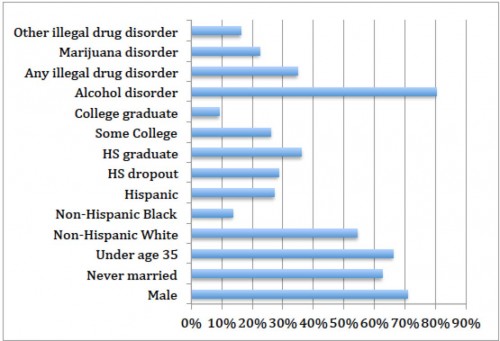 This group is also pretty young, with about two-thirds below the age of 35. More than 70 percent are male. Most have never been married. The majority is non-Hispanic white, though 27 percent identify as Hispanic/Latino.

There’s no rocket science happening here. Yet I believe it’s useful to break such things out. These data underscore the need to address under-insurance as well as uninsurance in addressing substance use problems.

These data also underscore the importance of alcohol as a serious national problem. Alcohol is the intoxicant that causes the most widespread criminal justice problems.

The prevalence of alcohol disorders underscores one more thing. Many people with alcohol problems will never access the specialty addiction system. That’s the reality. ACA’s efforts to promote screening, brief intervention, and referral to treatment (SBIRT) and other strategies to integrate substance abuse services into mainstream medical care are thus especially crucial.