This post has been cited in the 15 April 2010 edition of Health Wonk Review.

One of the arguments I’ve made that gaming the individual mandate in Massachusetts is not likely to be pervasive is that the uninsurance rate is very low. But, as I admitted, it depends exactly how that uninsurance rate is measured. In fact, no publicly available measure of it allows one to draw the strongest possible conclusion about gaming. That’s because the data to compute the right measure–month-by-month insurance status for a representative sample of the population–are not available. The best we have come from surveys that don’t quite ask the right questions.* This lack of data to address a fundamental question about health reform in Massachusetts is a troubling harbinger of data limitations as health reform rolls out nationally. A paucity of data reduces the scope of what can be assessed, which establishes a poor environment for promotion of policy improvements. 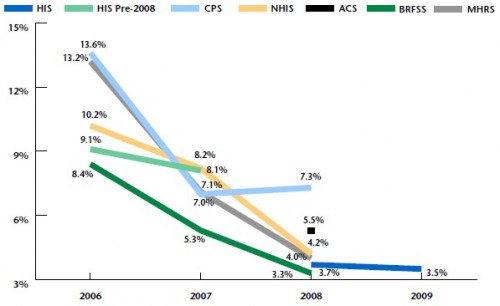 The six surveys represented in the figure are:

Clearly health reform in Massachusetts has had a substantial downward effect on the non-elderly uninsurance rate. Yet estimates from different surveys vary by more than a factor of two. Why? A second Urban Institute document authored by Sharon Long and colleagues illuminate the relevant factors: question wording and placement in the survey; survey design; fielding strategies and timing; and the handling of survey question non-response.

For example, the main way the CPS differs from the other surveys is that it asks respondents in February-April about insurance coverage over the past calendar year. The other surveys are snapshots, collecting coverage data at the time of the survey. That’s a significant difference and may explain why the CPS estimate is, in general, higher than the others. In fact, it isn’t clear exactly what the CPS is measuring, and it is known to over-count the uninsured. (To be fair, some suggest that CPS estimates are best interpreted as point-in-time snapshots.)

Also, as Long and colleagues point out, the MHRS “asks about use of the state’s Health Safety Net [formerly, the Uncompensated Care Pool] (which consumers may mistakenly view as coverage) …” Not all other surveys pick up on that distinction. That would tend to cause surveys that do not explicitly make that distinction to underestimate the uninsurance rate. At 4.0%, the 2008 MHRS estimate is in the middle of the pack.

So, what’s the uninsurance rate in Massachusetts? Well, it depends on (a) what you mean by “uninsured” (full year, part year?) and (b) which survey you trust to provide the answer. At a point in time it seems it’s between 3.5% and 5.5% for the non-elderly. But that doesn’t really tell us the potential size of gaming in Massachusetts, which is cited by insurers as a significant contributing factor to their proposed rate increases that were rejected by regulators. Those who would game the health insurance system won’t all do so during the same month(s) the survey is in the field. Put another way, just because an individual is insured at the time of interview does not mean he is so for the entire year.

It is possible that the proportion uninsured at some time (any time) in the year is much higher than the proportion uninsured at a specific fixed time in the year. The fact that the CPS estimate is very high suggests this possibility, though as I wrote there are problems with CPS insurance estimates. Fundamentally, we don’t know the rate of “any time in year” uninsurance in Massachusetts. What we need are administrative data that provide coverage status for each person and each month. None of the surveys for which results are provided above fill that role.

I’m not comfortable taking the insurance industry’s word on the matter of gaming, or that of regulators for that matter. I’d rather see a community of scholars have access to the necessary data to inform the debate with more transparent analysis. Given the data available right now, that’s just not possible. And that’s a shame. If we’re going to get tough with insurers I wish we’d get tough on data access rather than just fighting over numbers we can’t independently validate.

Massachusetts taxpayers have invested a considerable sum in health reform, and taxpayers in all states are about to do so as well. Due to avoidable data limitations, we don’t know exactly what we’re paying for in Massachusetts. Will that limitation be repeated on a national scale?

* I am aware of one survey that asks the right questions, the Medical Expenditure Panel Survey. It has other advantages in an analysis of gaming. But it isn’t designed to support state-level estimates.