What’s been driving the slowdown in health spending—and will it stick?

Those are the questions that Amitabh Chandra, Jonathan Holmes, and Jonathan Skinner tackle in a new paper that you should read in full: Is This Time Different? The Slowdown in Healthcare Spending. Here’s a bonus comment from Doug Elmendorf, director of the Congressional Budget Office.

The 1990s present a cautionary tale for trying to read tea leaves about the recent downturn in health spending growth: it slowed during early 90s, but picked right back up toward the end of the decade. Commentary about recent downward trends have largely fallen into two buckets: it’s Affordable Care Act (often if you like it), or it’s the recession (often if you don’t). Chandra and Skinner find scant evidence to bolster either of those claims.

The major drivers of the health care slowdown are changes in relative prices to consumers and providers, and technological growth – each of which will affect private, Medicare, and Medicaid patients differently.

The rise in high-deductible health plans in the private market and managed care contracts in Medicare seem to account for part of the slowdown. The pace of technology diffusion also seems to have slowed; drug spending actually declined because of a substantial shift toward generics and an absence of new blockbuster drugs.

But will the slowdown persist?

In sum, we predict a middle ground; short of a fundamental change in how we pay for new cost-ineffective technologies, health care costs will bounce back to something closer to a growth rate of GDP plus 1% or more; perhaps not the “The Hills are Alive”, nor the cult horror film “The Hills Have Eyes.”

Their predicted growth rate of GDP+1.2% is slower than we’ve seen in the past, but still not cause for celebration. That rate takes the health care sector’s share of the economy from its current 18 percent to 23 percent in 2032 and 28 percent in 2050. For reference, here’s a chart from the Kaiser Family Foundation on historical health spending trends in excess of GDP. 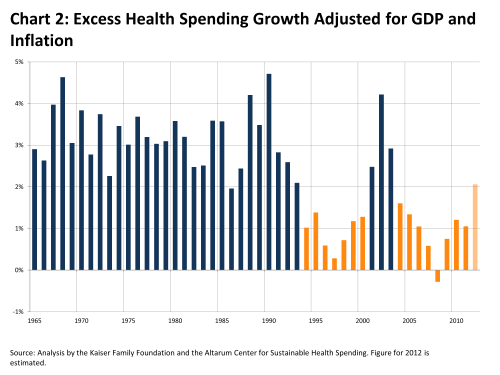 Though the acceleration of technology spending—particularly drugs—has abated, that spending is still growing (pharmaceuticals are only about 10% of health spending). Other devices and surgical procedures are on the rise, and the financial markets suggest continued development and diffusion of profitable medical technologies. There’s just not evidence that these long-term trends have been “fundamentally altered.”

Though innovations in the ACA hold some promise for delivery system reform—which could lead to more prudent use of therapies—the authors conclude:

[U]ltimately, we still must be concerned about the long-term technology pipeline that could continue to deliver new and expensive technology with very modest medical benefits, but very poor value for the dollar.