The problem with waste

The harder thing to accept is that because of our sub-optimal quality, we actually need to spend more on parts of health care. Yes, more.

There’s a new study out in the Annals of Family Medicine that funded in part by the Robert Wood Johnson Foundation.  Here are the fine points:

PURPOSE The US Preventives Services Task Force (USPSTF) is authorized by the US government to review and disseminate the scientific evidence for clinical preventive services. The purpose of this study was to evaluate the alignment of Medicare preventive services coverage with the recommendations of the USPSTF before implementation of health reform.

By now you should all know about the USPSTF. They are charged with reviewing the evidence and making recommendations for what preventive services should be offered. Those that receive an A or B rating have significant data behind them and should be performed. This study wanted to see how well Medicare covered such services. Theoretically, insurance such as Medicare should cover such services, as they are proven to provide a benefit, sometimes even paying for themselves. The authors broke out coverage into two parts, coordination (or everything leading up to the service), and the service itself. Here’s what they found: 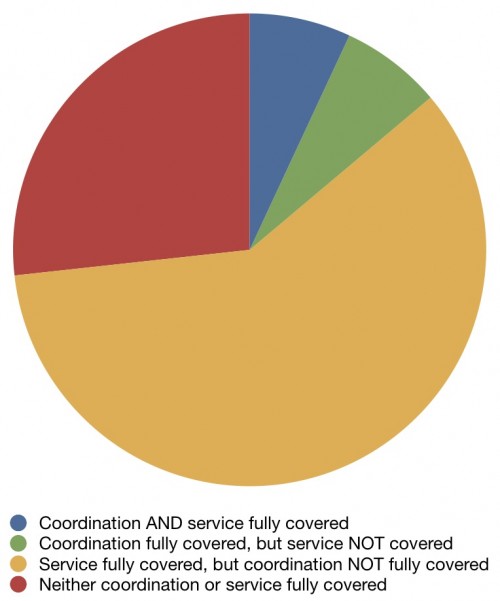 The study didn’t stop there, though. They also looked at D rated studies, or those that are not recommended. Here’s a list of screening services that Medicare does cover that the USPSTF does NOT recommend:

The problem, however, is that for many Americans, and the politicians who represent them, this doesn’t qualify as waste; it can’t be cut. If we suggest it should be, there are cries of rationing and death panels. But make no mistake about it, this kind of waste is a huge drain on our resources, and until we’re willing to confront it, we will never be able to control health care costs.