Many of the emails and some of the comments I got yesterday made me realize that there are some serious misunderstandings out there about the difference between name-brand drugs and generics, as well as some bizarre assumptions about the merits of newer drugs.  So here’s a quick primer on how you (and everyone else) are sometimes not getting accurate information about your pharmaceuticals:

As a society, we’re addicted to drugs.  Almost all of them are legal, and we’re not abusing them per se, but we want them desperately.  The problem is that so many of the new prescription drugs we take are no better than old drugs that are less expensive.  Since new drugs are almost always more expensive, we’re wasting money.  In some cases, the older drugs are actually better – meaning that we’re spending more for less benefit.  Even more concerning, sometimes new drugs aren’t actually “new” at all, making their production and marketing suspect at best.

I want to state clearly the following caveats: I don’t hate drug companies.  I don’t hate people who work for drug companies. I don’t even hate drugs.  In fact, I, as a practicing physician, have seen drugs save lives, improve health, and make daily life incredibly better.  But that doesn’t mean the pharmaceutical industry gets a free pass.

Often, completely new drugs come to market along with a huge advertising campaign and the promise of research showing their effectiveness.  The problem is that to get FDA approval, drug companies only need to show that their drug is more effective than a placebo.  That’s right – effective doesn’t mean better than what is already available, it means better than nothing.  And often, unless a drug company pays for a head-to-head comparison, this type of research just won’t happen.

Once in a blue moon, however, these studies do happen.  One of the biggest and best of them was the Antihypertensive and Lipid-Lowering Treatment to Prevent Heart Attack Trial (ALLHAT).  Drugs for high blood pressure are intended to reduce the risk of complications or death due to coronary artery disease or other cardiovascular disease.  There were so many drugs to choose from for this trial (at different costs) that the National Heart, Lung, and Blood Institute (NHLBI) primarily organized and supported a randomized, controlled trial to examine which was best.  This study was enormous; it took place in 623 centers in the United States, Canada, Puerto Rico, and the U.S. Virgin Islands between 1994 and 1998, and included over 33,000 participants.  Patients received one of four drugs:

The last of these, the diuretic, was the oldest of the drugs, and by far the cheapest.  However, at the end of the study, the results were clear.  This old, cheap diuretic was significantly better at preventing at least one of the major types of cardiovascular disease when compared to the other, newer drugs. Since the diuretic was also significantly less expensive, it should be the drug of choice in initial treatment of high blood pressure.  However, it usually is not.

The other drugs in the ALLHAT study were good faith efforts to create new molecules to treat a chronic disease.  However, in many other instances, new drugs are just sleight of hand “changes” to old drugs that have no expectation of being better.  When creating drugs through organic synthesis, mirror image molecules are created.

So, if drug D is created, in the last step you wind up with half D and half D’(the mirror image of D).  The mirror image is usually inert and has no effect on the drug or the individual taking the drug, but it is left in because there is an expense to remove it.  Years ago, the drug companies hit upon a brilliant idea.  If they removed that non-working, mirror image part of the pill, they could claim they devised a new drug! 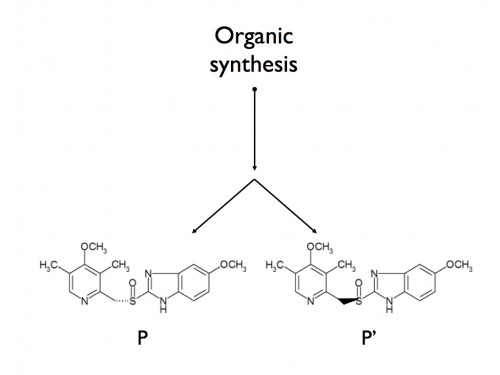 Think this is rare?  Ever heard of Nexium (“the purple pill”)?  Nexium is just Prilosec, with the mirror image part removed.  And Prilosec is an effective, and now generic, drug for heartburn.  Prilosec is P + P’; Nexium is just P.  There is no reason to believe that equivalent amounts of the two drugs are not the same – and research supports this.  Four head-to-head studies compared 20 milligrams of Prilosec to 20 or 40 milligrams of Nexium.  But you have to remember – half of Prilosec is P’(filler)!  So these studies really compared 10 milligrams of P to 20 or 40 milligrams of P.  Shouldn’t more be better? One would think so, but it was barely so, and only in half the studies.  And, of course, none of the advertising stated that you could get the same improvement just by taking more Prilosec.

These aren’t even the worst offenders.  In the worst cases, all that the drug companies change is the color of the pill.

Sarafem, marketed by Lilly for premenstrual dysmorphic disorder, is exactly the same molecule as that found in Prozac.  The only difference, besides the cost, is that Prozac has a green coating, and Sarafem’s is pink.  That’s it.  There is no reason you couldn’t just buy cheaper generic Prozac (Fluoxetine) and color it pink for the exact same experience and effect.

Are you on a high blood pressure medication that is not a diuretic?  Did your doctor explain why he thought the more expensive drug was necessary?  Do you think the cost is worth the difference?

Are you on Nexium?  Did your doctor explain to you the real difference between that and generic Prilosec?  Do you think the cost is worth the difference?

Are you on Sarafem?  Did your doctor explain to you that generic Prozac is the exact same molecule?  Do you think the cost is worth the difference?

Should insurance have to cover many of these?  Should the government?  Should you?

Adapted from Don’t Swallow Your Gum! by Dr. Aaron E. Carroll and Dr. Rachel C. Vreeman. Copyright © 2009 by the authors and reprinted by permission of St. Martin’s Griffin.

4.         Wahlqvist P, Junghard O, Higgins A, Green J. Cost effectiveness of esomeprazole compared with omeprazole in the acute treatment of patients with reflux oesophagitis in the UK. Pharmacoeconomics 2002;20:279-87.