For better or for worse, whenever many are asked about how they would help control the cost of the health-care system, tort reform always seems to be one of the first things offered as a solution.

The argument goes that doctors, afraid of being sued, order lots of extra tests and procedures to protect themselves. This is known as defensive medicine. Tort reform assumes that if we put a cap on the damages plaintiffs can win, then filing cases will be less attractive, fewer claims will be made, insurance companies will save money, malpractice premiums will come down, doctors will feel safer and will practice less defensive medicine, and health-care spending will go way down.

Let’s start with some basics. How much does the malpractice system really cost in the U.S.? The most recent, comprehensive estimate, which was published in Health Affairs in December, estimated that medical liability system costs were about $55.6 billion in 2008 dollars, or about 2.4 percent of all U.S. health-care spending. Some of that was indemnity payments, and some of it was the cost of components like lawyers, judges, etc.; most of this, however, or about $47 billion, was defensive medicine. So yes, that is real money, and it theoretically could be reduced.

The question is, will tort reform do that?

That’s actually an answerable question. You could look at areas where tort reform has already happened and see how things have changed. For instance, we could look at Texas, where non-economic damages on malpractice lawsuits were capped at $250,000 about eight years ago. You might remember when Rick Perry and Newt Gingrich said:

So what happened to costs of care after that law was put in place? Public Citizen analyzed just that (pdf) using data from the Dartmouth Atlas of Health Care (Selected Medicare Reimbursement Measures): 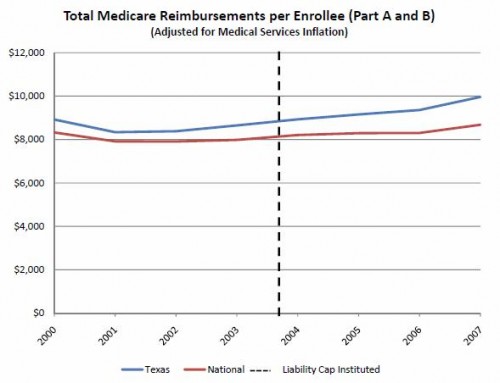 Texas is blue, the nation is red, and the law went into place at the dotted line. If anything, Texas’s Medicare spending seems to have gone up faster than the nation’s since 2003. Hardly a persuasive argument for tort reform = cost control.

Another thing you could do is compare areas with high and low malpractice premiums, and see whether doctors practice differently. Guess what? Someone did. In the same issue of Health Affairs, another study showed that tort reform, which might lead to a 10 percent reduction in malpractice premiums (not small), which might translate into a health-care spending reduction of 0.1 percent. Let me show you that in a chart: 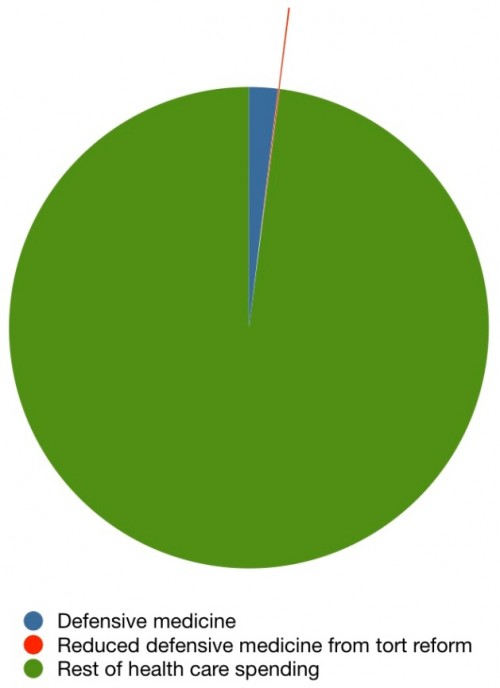 If the pie represents our total health-care spending, then the blue wedge is defensive medicine. Not as big as you thought, likely. But the red sliver, which I pulled out for easier viewing, is what we could expect to see in savings from tort reform.

I’m not going to disagree that the malpractice system needs fixing. Likely, too many claims are filed that have no merit. In addition, many more are never brought to trial that absolutely do. I completely support efforts at malpractice reform.

But it’s not the solution to our high health-care spending. Tort reform does not equal cost control.