Suppose we could reduce the rate of cardiovascular disease (CVD) and mortality through increased health spending and/or better use of dollars spent. Would that help or hurt economic growth? One answer is suggested by a recent paper by Suhrcke and Urban in Health Economics, “Are Cardiovascular Diseases Bad for Economic Growth.”

We assess the impact of cardiovascular disease (CVD) mortality on economic growth, using a dynamic panel growth regression framework taking into account potential endogeneity problems. In the worldwide sample we detect a non-linear influence of working age CVD mortality rates on growth across the per capita income scale. Splitting the sample (according to the resulting income threshold) into low- and middle-income countries, and high-income countries, we find a robust negative contribution of increasing CVD mortality rates on subsequent five-year growth rates in the latter sample. Not too surprisingly, we find no significant impact in the low- and middle-income country sample.

As the abstract above states, the authors employ some sophisticated econometric techniques. However, their basic findings are revealed in a descriptive scatterplot: 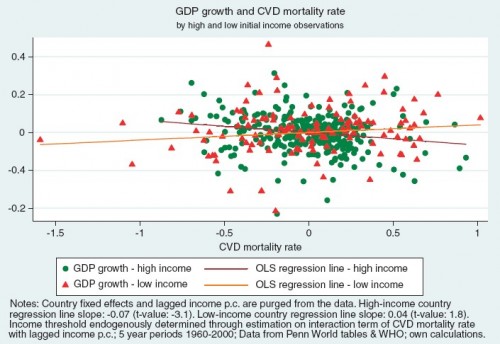 Thus, according to this study, health spending and, in particular that aimed at lowering CVD mortality, may increase growth if it reduces CVD mortality. (It’s plausible this finding applies to other diseases too.) That’s not to say any spending is good. The more bang for the buck the better. But it is possible that better health is good for the economy and that justifies spending more or spending more wisely for it.