Harvard is Exhibit A on why health reform is so challenging

The university is adopting standard features of most employer-sponsored health plans: Employees will now pay deductibles and a share of the costs, known as coinsurance, for hospitalization, surgery and certain advanced diagnostic tests. The plan has an annual deductible of $250 per individual and $750 for a family. For a doctor’s office visit, the charge is $20. For most other services, patients will pay 10 percent of the cost until they reach the out-of-pocket limit of $1,500 for an individual and $4,500 for a family.

The story is vague about the previous cost-sharing was, but various faculty—none of whom are the same faculty that advised on health reform, a point that seems waved aside in some of the glee from opponents—labeled the move “deplorable, deeply regressive, a sign of the corporatization of the university” and “equivalent to taxing the sick.” The comments, though doubtless sincere, seem oblivious to realities of health care trends. Two papers in this month’s issue of Health Affairs key in on growth in out-of-pockets spending before the ACA. These days, four in five workers have plans that require meeting a deductible before coverage kicks in, and the number of employees enrolled in plans with deductibles exceeding $1,000 (four times the new Harvard deductible) has grown from 10% in 2006 to 41% in 2014, at a pretty linear pace.

But not all deductibles are created equal: there’s a chasm between employer-sponsored coverage and the individual market. Jason Millman illustrates this usefully chart comparing Harvard’s new deductible against industry averages in his story. Lumping all employers together, though, obscures differences by firm size, differences that could have important political implications.

Using the Kaiser Family Foundation’s 2014 employer benefits survey I broke out the differences by plan type and small/large employer among workers with single coverage. On the left-hand side, you’ll see the Harvard deductible, the deductible for large and small firms, followed by the average deductible from the year’s silver plans, before cost-sharing reductions (via Jason’s post). The jump between large- and small-firm deductibles isn’t just an artifact of higher HDHP prevalence; across all plan types (HMO, PPO, etc) small employers had deductibles 45 to 150 percent higher than large firms. 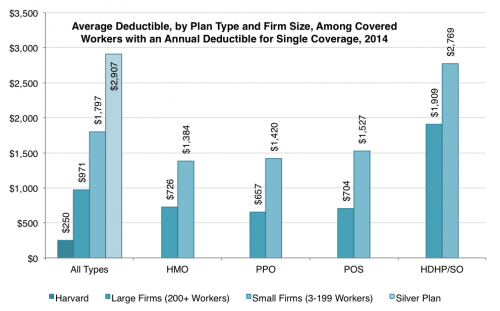 Yes, Harvard had—and still has—irrefutably generous health benefits. But notions of “affordability” change across markets: the individual market has generally been accustomed to much higher deductibles than employer-sponsored coverage, and large firms tend to offer cushier plans than their smaller counterparts. (Using KFF’s definitions, about 70% of covered employees work for large employers.)

The cost of employer-sponsored insurance is not purely the province of firms and their employees. Sure, the wage-benefit tradeoff is a phenomenon encountered by the worker herself. But when employers lean on the benefit end of that spectrum,  we all subsidize it—to the tune of $300 billion in lost federal revenue each year. There’s general consensus that very generous coverage can lead to overconsumption of insurance and low-value care. And to the extent that we worry entrenched private trends in prices and utilization could spill over into public programs, unchecked—and disparate—growth gives rise to concerns about public spending, payment gaps and access issues.

If we accept that something’s gotta give with health spending, and we want to talk about more than just Medicare, employer coverage is a beast we have to confront.

But getting anywhere near employer-sponsored insurance is a political and legal minefield. Affected populations are large and resourced enough to organize (unlike in, say, Medicaid). And when states made modest attempts at health reform prior to the ACA, there were few tools at their disposal when it came to employer coverage. Most large employers self-insure, meaning they’re exempt from state regulations, governed instead by the federal Employee Retirement Income Security Act (ERISA).

The ACA is remarkable, among other reasons, because it did manage to get at employer-based coverage at meaningful ways.

Harvard’s enrollment guide offers a short laundry list of ACA provisions that supposedly contribute to their recent changes, but I think Megan McArdle was correct in naming the Cadillac tax as key culprit.* Secular trends matter, but, for very generous plans, the tax is a decisive nudge toward more cost-sharing. The provision doesn’t kick in until 2018, but prudent employers will be looking ahead. Based on available evidence, it’s not a great leap to suppose that Harvard might find itself subject to the tax on the future—particularly if health spending growth ticks upward again in the next few years, a point Alan Garber makes in the NYT story.

Not for nothing, Avik Roy’s “Transcending Obamacare”—the most comprehensive and well-elaborated “replace” strategy to emerge from the right—preserves the Cadillac tax, actually accelerating implementation by a year. Abolishing the tax preference for employer coverage isn’t politically feasible, but the provision starts to grapple with it, in a way that no policy has for decades. It was a hard-won bit of policy and, given its unpopular reception, unlikely to be re-won anytime soon.

The central tension that governs every single decision about health insurance policy—at Harvard, in Congress, on either side of the aisle—was aptly summarized by Carnegie Mellon economist Martin Gaynor yesterday: “You can have lower costs or more generous health insurance coverage, but you can’t have both.”

*Update: Among the ACA provisions listed in the benefits guide, preparing for the Cadillac tax would appear the most logical culprit. However, the math doesn’t seem to bear that out. It’s possible that Harvard is simply trying to bring benefits closer to industry norms.