A long time reader of the blog was kind enough to alert me to the release of the International Federation of Health Plans’ Annual Comparative Price Report.  From their press release:

The International Federation of Health Plans today released its 2010 Comparative Price Report detailing its annual survey of medical costs per unit. The study is done to help member plans better understand why health care costs are so much higher in some countries than others. Prices for the same medical procedures, tests, scans and treatments vary widely from country to country. The survey data showed that average U.S. prices for procedures were once again the highest of those in the 12 countries surveyed for nearly all of the 14 common services and procedures reviewed.

It shouldn’t take you long to read the whole report (it’s mostly slides), but I went ahead and remade some of the charts for you to see.  They are baffling.  For each of these, you’re looking at the price, or what was charged to the insurer (this did not include Medicare in the US).  Let’s start with a CT scan of the head: 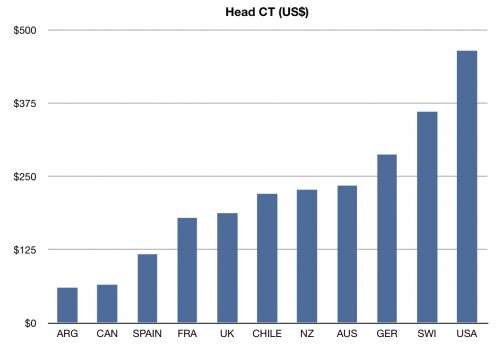 Why does it cost so much more in the US? Does the radiation work better here?  Are the scanners different? If you’re wondering, the CT scanner was invented in the UK, so it’s not like there’s some reason to believe our machines are better. 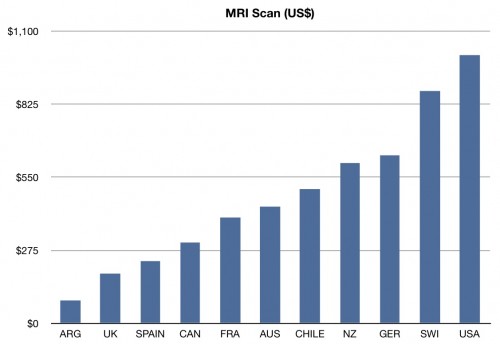 Once again, it’s the most expensive here.

Forget scans.  Let’s try out a procedure.  How about a normal infant delivery? 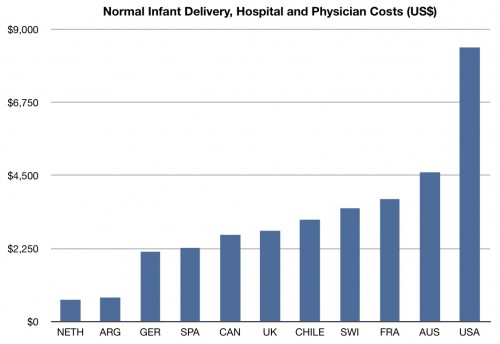 There’s nothing wrong with paying for quality.  But – remember – we have the highest infant and maternal mortality of comparable countries.  And yet we are paying nearly double what the next nearest country is.  This is just the cost of the hospital and physician, so don’t blame the government or the insurance companies or the drug companies.

Let’s take an easy procedure.  How about an appendectomy? 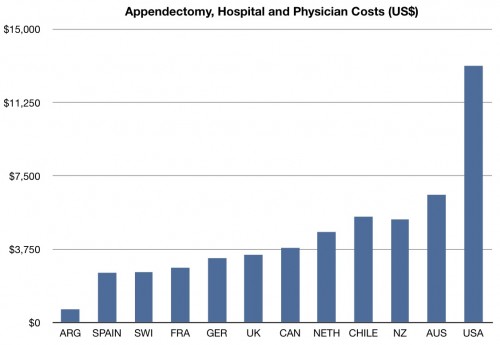 WTF?  It’s an appendectomy!  What do we imagine we are providing for all that money?  Why can everyone else do it cheaper?

I can almost justify all of this, though, if I squint, tilt my head, and drink heavily.  Maybe we are doing something better.  Something I can’t detect or imagine.  But maybe.

So let’s focus on something that can’t be different.  Something like drugs: 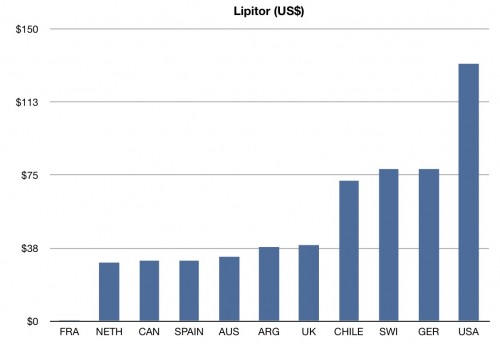 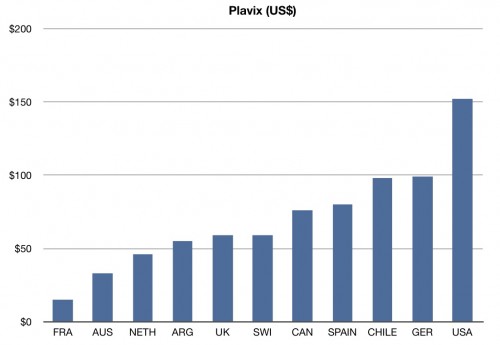 Words fail me.  Do we imagine that the Lipitor and Plavix somehow work better in the US?  That somehow the molecules do more here?  We must, or else there’s just no way to justify the fact that the same exact pills cost so much more here than they do anywhere else.

I know I’m being a bit snarky, but the fact is that every time someone tells me we could never afford another country’s health care system, I want to cry.  It’s hard to find a way to show our system is of higher quality.  There’s no way to demonstrate that we have better access.  And then you see stuff like this and realize that not only are we spending way more, but we are spending more for the  exact same things.