I’m forced to go there

Let’s start here, since Louis CK explains this better than I can:

I bring this up because I just can’t drop the Arizona Medicaid transplant decision.  I’m appalled at how little attention it’s getting.

To bring you up to speed, in an effort to cut the budget in Arizona, the state decided to cut coverage for transplants for many people in Arizona who are covered by Medicaid.  Without these transplants people will die.  There are really no alternatives for them, no cheaper therapies to offer.

Make no mistake about it.  This is a cost decision.  Arizona is saying that these people will not be covered because it’s too expensive:

“Arizona simply doesn’t have the money,” Brewer told Channel 4’s Sarah Smith when asked why it appeared that she was willing to risk the lives of endangered patients all for the purpose of slashing the $1.4 million transplant program amid $1 billion Medicaid budget shortfalls.

Arizona is potentially going to let people die because they don’t want to spend the $1.4 million.

One of the reasons that people like me sometimes say that a public system is better is because it’s transparent.  We all know, and can decide, what public systems should and should not cover. Decisions are made in the light of day. We all know this is happening. But changes only get made if the press covers it, or people care.

Do you?  I ask, because many of you seemed to think that ACA contained panels that would, well, decide when people should die because the cost was too high.  You seemed pretty upset by that.  I’d just like to know why this is different.

No one needs to lecture me on the fact that we can’t afford everything.  I’ve said that many times.  I just don’t understand the priorities here.  Why would the thing you cut be the lifesaving measure? Especially when the cost savings are, well, ridiculous.  I made this from a news report in Arizona: 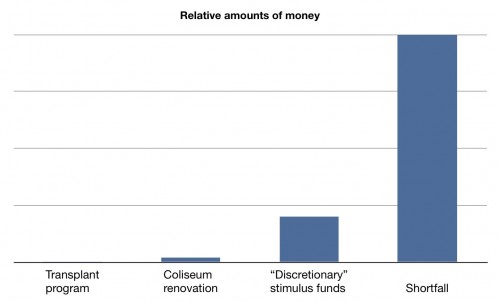 On the right there is the Medicaid shortfall.  It’s huge.  Next to it, are the discretionary funds Arizona has received already from the federal government that the reporter in this piece says are not well accounted for.  The second column from the left is for a renovation Arizona is doing for a coliseum.  The first column is the transplant program they cut.

And never, ever say the words “death panel” again.